Chalfont St Giles is an historic village and as such has many old buildings and streets that do not conform to modern standards for pavement and carriageway width. The High Street and Deanway are areas which are often reported as having issues such as speeding, inappropriate parking and careless driving.

At the beginning of 2022 the Parish Council positioned their Mobile Vehicle Activated Signs (MVAS) on Pheasant Hill leading to the High Street and on Deanway outside of Miltons Cottage. The signs are designed to flash at motorists who are exceeding the 30mph speed limit. They also record the times and speeds of the vehicles passing the signs. Below is the data taken over a 4 week period on Deanway.

As can be seen from the data, the majority of drivers adhere to the speed limits on the road, this data is in conflict with the perception by pedestrians.

Despite this data, the Parish Council applied to the HS2 Road Traffic Fund for 5 measures of traffic calming to be applied to the village centre. The fund is controlled by HS2 in conjunction with Buckinghamshire Council as they are the Highways Authority. The five measures are as follows:

In July 2022 the Parish Council were informed that stage one assessments for all schemes had been completed by technical officers who have a wide range of technical expertise and experience in relation to road safety schemes. Their recommendations had been reviewed by the project board. The proposals for raising the two existing zebra crossings on High Street and Deanway were being taken forward to stage 2, the rest of the measures were unsuccessful.

We have been told that we will hear more about the success of our stage two bid in January 2023.

Why did we ask for money from HS2?

These prices were valid in July 2020.

To implement any traffic calming measures, the Parish Council would need to raise funds or seek funding, this is why we submitted several traffic management plans to the HS2 fund.

The Parish Council have also applied, to the Buckinghamshire Council Community Board for Denham, Gerrards Cross and The Chalfonts, for double yellow lines to be painted at and opposite the junction of The Lagger and Deanway. This has been identified as an area that has had accidents in the past and one that adds to the congestion on Deanway. This application was submitted by the September dealine in 2021. The applications go through a process and a Project Initiation Document (PID) is produced. However, Buckinghamshire Council will be changing their Highways Contractor in April 2023 and we have been told that no further works will be carried out until the new contractor is in place. 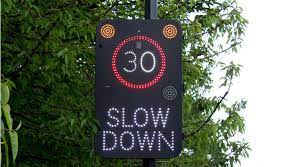 Buckinghamshire Council are the Highways Authority and are responsible for our roads. Works cannot be carried out on the highway without their approval and consent.

What Can you do to help?